THE MINESWEEPER:
HMS LEDSHAM. M.2706 was built by J. Boison, in Poole 1954, Hull launched the 30 June 1954.
Completed the 22 March 1955.
1955 to 1956 Senior Officer's ship 232nd Mine Sweeping Squadron.
1957 to 1965 Operational Reserve, Rosneath. Then Land Cradled.
1967 Clyde Division RNR as Accomodation Ship.
Possibly did service on the Suez Canal for clearing the mines.
The 21 April 1971, she was sold to Metal Recoveries, Newhaven for BU.
She is entirely wooden and a rare surviving example of shipbuilding.

Click on the link below to see the minesweeper HMS LEDSHAM coming alongside HMS GANGES, for ten seconds at the very beginning of this archival film from 1956, with the crew and the Duke of Edinburgh on board:
http://www.britishpathe.com/video/the-duke-of-edinburgh-visits-h-m-s-ganges/query/DUKE+OF+EDINBURGH+VISITS

Below, a still from the same film showing the minesweeper HMS LEDSHAM and a sound recording of a conversation with Brian Horton, Naval Historian, Consultant and Researcher, that took place during his visit to the Minesweeper on the 22nd of February 2012: 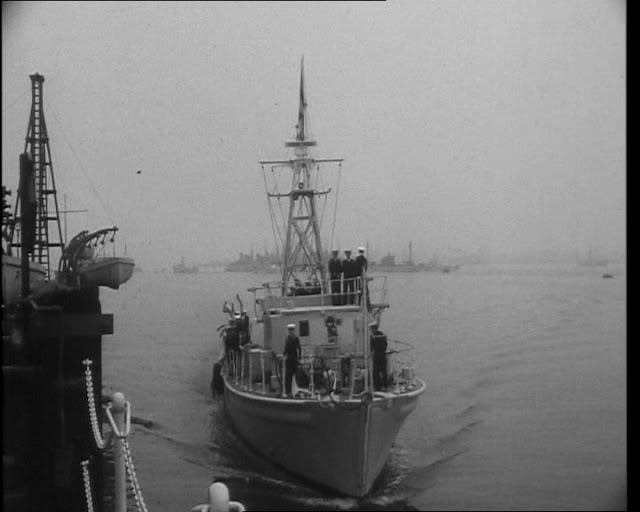 HISTORY OF THE HAM CLASS:
The Ham class was a class of inshore minesweepers (IMS), known as the Type 1, of the British Royal Navy. The class was designed to operate in the shallow water of rivers and estuaries. It took its name from the fact that all the ship names were British place names ending in -"ham". The parent firm who were responsible for supervising construction was Samuel White of Cowes, Isle of Wight.


The class consisted of 93 ships, launched between 1954 and 1959. HMS Inglesham (M2601) was the first. They were built in three slightly different sub-groups, the first sub-group being distinguished by pennant numbers beginning with 26- and the second and third sub-groups being distinguished by pennant numbers beginning with 27-. The 26- group were of composite construction (wood and non-ferrous metals and the 27- group were all-wooden, of which the third sub-group differed by having a prominent rubbing strake around the hull and slightly enlarged dimensions.


The vessels displaced 164 tons fully laden and were armed with one 40 mm Bofors or 20 mm Oerlikon gun. They were 32.5 metres long overall by 6.4 metres beam. The construction was of wood and non-ferrous metals to minimise magnetic signature. The crew complement was 15, rising to 22 in wartime.


The engines of this class were Paxman diesels, some of which were built under licence by Ruston and Hornsby of Lincoln. Each vessel had: two 12YHAXM (intercooled) for main propulsion, rated 550 bhp at 1,000 rpm, plus one 12YHAZ for pulse generation. Maximum speed was 14 knots (26 km/h) dropping to 9 knots (17 km/h) when mine sweeping.